What is Mold Illness? Better yet, do people get sick after being exposed to water-damaged buildings? 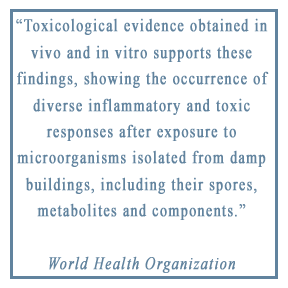 Yes, people are indeed sickened and stay sickened by exposure to Water Damaged Buildings (WDB). There have been lots of names for the illness over the years, including “Mold illness.” The best discussion of the academic basis for this illness is found in the Expert Treating Physicians Consensus report published 7/2010 (available on this site). Let start with some basic ideas: this illness is not an allergy. It is an inflammation within the body which is caused by an immune system that has gone haywire. The term “mold illness” is a subcategory of biotoxin illness called Chronic Inflammatory Response Syndrome (CIRS). The proper definition of CIRS is:

“An acute and chronic, systemic inflammatory response syndrome acquired following exposure to the interior environment of a water-damaged building with resident toxigenic organisms, including, but not limited to fungi, bacteria, actinomycetes and mycobacteria as well as inflammagens such as endotoxins, beta glucans, hemolysins, proteinases, mannans and possibly spirocyclic drimanes; as well as volatile organic compounds.


How Did I Get Sick?

This illness happens after exposure to the interior environment of a Water-Damaged Building (WDB). There are many ways buildings become home to a toxic mix of microbes, and harmful chemicals. Buildings can host fungi, bacteria, mycobacteria, and actinomycetes as a result of construction defects like inappropriate ventilation, faulty construction of crawl spaces, inadequate building design, flat roofs, fake stucco cladding without adequate caulking, basements exposed to saturated ground water conditions, not correcting water leaks and more.

Since 1998, Dr. Shoemaker has treated over 7,000 patients with an illness caused by exposure to these conditions. Each patient has a syndrome that is readily identified by blood tests performed in standard medical labs all over the country. These illnesses reflect a growing societal problem: dangerous buildings. Inhaling these dangerous inflammagens is what makes people sick.

We live in the Era of Dangerous Buildings with 50% of our buildings (NIOSH, 2011) having water damage so the likelihood that you won’t ever be exposed to dangerous buildings is quite low.

What Happens in the Body?

Many patients “don’t look that bad.” But those people are struggling with an illness that causes them to lose their quality of life. These patients don’t know that they have a genetic susceptibility to develop this illness based on their immune response genes (HLA–DR). They don’t know that the inflammation that makes them ill comes from within: it is due to an assault by their own unregulated innate immune system responses. Because of exposure to the interior environment of a water-damaged building (WDB), these patients will have a series of abnormalities in innate immune responses that will not self heal; will not abate in severity [actually increase!] and will continue to cause illness from blood- and tissue- based inflammation as well as alteration of the regulation of fundamental genomic activity. At the core of why one person becomes ill from this exposure and another doesn’t is their gene susceptibility (or predisposition) – what is built into their DNA. Every person’s innate immune system is personal and genetically coded – thus, it works differently for each of us. When the body is faced with a foreign substance, it immediately begins to process that substance – recognize it, determine if it is good or bad, a friend or a foe, and throw it into the antigen presenting machinery that will normally generate an effective antibody response. If the body determines the substance is a foe, it will develop antibodies to bind these substances, called antigens. Normally the next time a non-mold susceptible person walks into a WDB, his antibodies will target the antigen and clear it out fast. That protection from so-called acquired immune responses just doesn’t happen in mold patients.

The genetics are clear: occurrence of specific HLA types are found in about 25% of the population. It is in these people that we find the sickened ones almost always (nothing is 100% in biology). In these people, the antigens stay in the body, and our own defenses bombard our body in response to those antigens. What you now have is a person who is defenseless against new exposures and is suffering daily from inflammation.

It is a vicious cycle – the foreign antigens (substances) stay in the body, causing the immune system to constantly fight back. This causes so much inflammation in the body that it leads to chronic illness, and the occurrence of many symptoms. Our entire being suffers from friendly fire from our own innate immune system.