In the spring of 2006, already six years into a quest for health that had taken us to countless doctors, practitioners, and half the teaching hospitals of Boston, we were passed information that suggested we seek help from Dr. Ritchie Shoemaker in Maryland. Having tried everything else we could, we were more than willing to try, no matter the cost or logistical difficulty: we were desperate to get our children and Susan well.

Ten years later, we can look at the skeptics and naysayers and say, “You were wrong.” We were right. We don’t need to reiterate the past decade.

Our stories are right there for everyone to see in Surviving Mold and our presentation at the 2015 CIRS Conference. Rather, we just want to shine a light on some wonderful recent moments in our lives, moments which have nothing to do with illness or wellness, but would never have been possible had we not followed what is now called the Shoemaker Protocol which gave us back control of our health and made real living possible again.

July 2006 saw our first visit to Dr. Shoemaker. We were sick, suffering and barely able to navigate our lives. Fast forward. Now let’s look at what our family did in July of 2016. First, our oldest son got married. 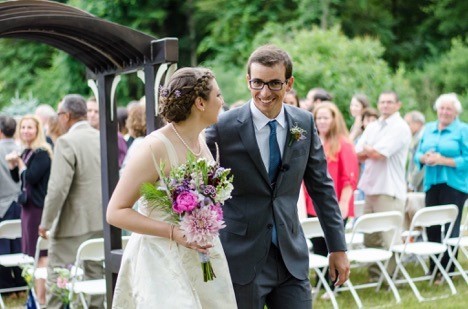 Getting married isn’t his only claim to success. This young man, who missed most of his senior year of high-school and had to leave the first two colleges he attended because of CIRS and the condition of their buildings, finally found a college he could attend with accommodation, graduated, got a master’s degree at another college and is now an auditor for a global accounting firm and leads a rich, full life. 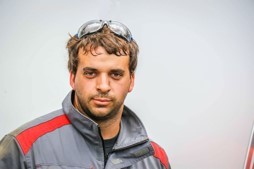 The younger brothers, Pascal and Marcel, also had a monumental July. Speaking of monuments, see the arbor in the photo above? They made it as a gift to their brother and his new wife. They designed it, cut it on their CNC plasma table, welded

it, and carried it—all 530 pounds! Marcel and Pascal are also CIRS survivors. Marcel is a full time engineering student, but spends much of the 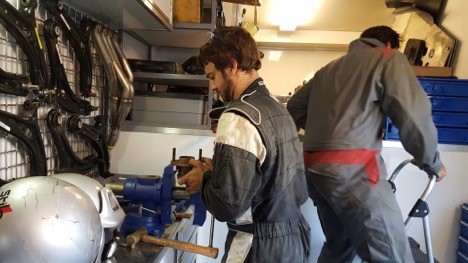 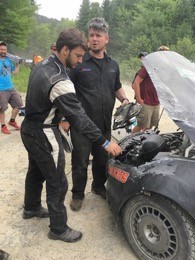 year working for his brother at the Team

O’Neil Rally School, where Pascal is the Motorsports manager, and as such is responsible for the construction, repair and maintenance of a fleet of company and client owned race cars.  They tour the US and Canada. This is challenging for them, and they put themselves at risk when they travel. They practice avoidance whenever possible. Sometimes they do get exposed, 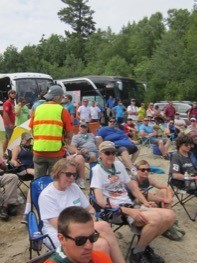 especially in some airports, but they plan for this and have a strategy for taking medications to prevent or mitigate their symptoms. Here is Marcel, a race crew chief, at the New England Forest Rally in Maine. Earlier in July, Pascal and Marcel had ventured to a race at the Baie de Chaleurs in the far reaches of Quebec. And before summer is through, they will have built another brand new race car, and will venture out to Minnesota for another rally race.

Not to be outdone, a week after watching her oldest son get married Susan was also at the New England Forest Rally for her annual stint as director of the Rally VIP Buses. This year, a hundred VIPs, occupying two coach buses, were ferried around to different race stages over two days. They were treated to catered meals served in the middle of the forest, drinks, snacks, and talks by racing experts. Susan was responsible for every aspect, and directing a crew of 16 volunteers as she pulled off a flawless event. 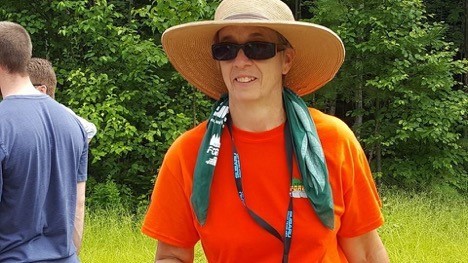 Those who know us understand that we are fiercely determined, and never more so than when trying to find answers to our health problems, and then in navigating a water damaged world. While we can point to recent successes in our lives, nobody should construe this as meaning that recovery and changes in lifestyle have been easy. They have been anything but. While we are healthier now, all of us are prone to relapse from exposures and each has bellwethers that alert us before we completely fall apart. We recognize and acknowledge these moments and take corrective action. Each of us approaches life a little differently with respect to CIRS and I think we have made peace with lifestyle accommodations and the periodic necessity of CSM and VIP. We are no longer fearful of the onset of symptoms for the Shoemaker Protocol remains a foundation for health we can always rely on to deliver us from catastrophe.

We felt compelled to share this because of the vast amount of misinformation about mold and CIRS as found on social media, even on sites which are supposed to be about the Shoemaker protocol. These sites are replete with hucksters trying to sell mold testing (outside of ERMI/ HERTSMI 2), supplements, and false hope. Then there are the trolls who lash out and criticize the Protocol and those who are trying to follow it. Next you have the whiners, who are unwilling to make the lifestyle changes necessary and then complain endlessly about how they can’t “tolerate” CSM, BEG or VIP. Really? Ask a cancer patient about how they feel after chemotherapy, or a Hepatitis-C patient after twelve months of interferon and ribavirin. Then there are those who insist on going into known water damaged buildings and get sicker. It shows up every day on Facebook: “I went to the bean supper in the church basement,” “I went to my mother-in-law’s for dinner,” “I dropped my kids off at school and they always come home a mess because of water damage.” What is the matter with these people? It’s hard to have sympathy for those who repeatedly make bad decisions. Despite having access to information that will make them well, they choose to repeat the very actions which cause them harm. Dealing with CIRS and water damage requires a backbone, and you have to be willing to use it. Speak up. Speak out. Advocate for your kids. Demand that buildings, public and private, be maintained and free from water damage, or that steps be taken to remediate buildings and accommodate those with CIRS. Don’t allow yourself to be bullied. Don’t allow yourself to be ignored. Use every opportunity to advocate for yourself or your dependents. No excuses!

Yes, CIRS demands much. We’ve paid a price, so we don’t want to hear from anyone that it’s too hard or impossible. We lost one home and all our possessions. We were forced from a second home when we couldn’t control the indoor environment, lost all our remaining retirement savings to the loss incurred at the sale of the second home and could only afford to start over by moving to another state with lower housing prices. Our children can’t visit their grandfather and most of their friends because of the moldy and water damaged homes they live in. We have virtually no visitors inside our home because of the protocols we put in place to protect against cross contamination of our one true sanctuary. We remain selective about where we go, and our children have already encountered the challenge of finding housing with good ERMI scores. It’s hard. It’s all hard.

Those in the early phases of learning about CIRS have so much more to go on now than we did in 2006. There was no community. There wasn’t even a name for this illness. This website alone, let alone the other publications and pages available on the web, are a wealth of information, and new development information and a directory to multiple CIRS physicians is at your fingertips. That said, there is also a load of misinformation on the web as well. We acknowledge that there might be some confusion created by the misinformation, but it shouldn’t remain a mystery too long once you are conversant in CIRS and Shoemaker protocol, and for this you need to go to the source.

I’d been corresponding with Frank, James’s father, for several years. His son, a former emergency room doctor, had a very severe case of ME/CFS, and Frank had been beating the bushes to find anything that could help. Nothing, however, was working.