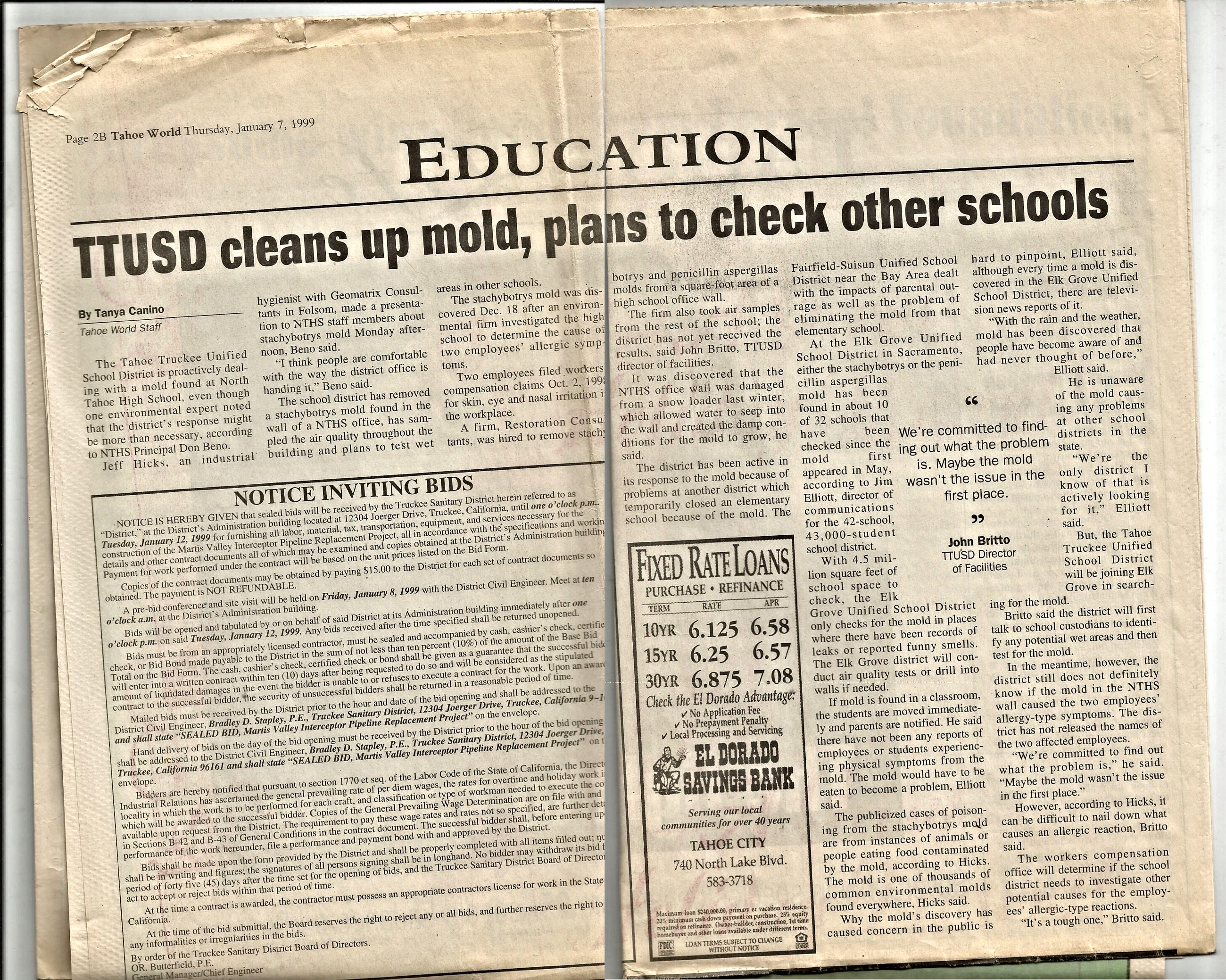 TTUSD cleans up mold, plans to check other schools

The Tahoe Truckee Unified School District is proactively dealing with a mold found at North Tahoe High School, even though one environmental expert noted that the districts response might be more than necessary, according to NTHS Principal, Don Beno.

Jeff Hicks, and industrial hygienist with Geomatrix Consultants in Folsom, made a presentation to NTHS staff members about stachybotrys mold Monday afternoon, Beno said. "I think people are comfortable with the way the district office is handling it." Beno said. The school district has removed a stachybotrys mold found in the wall of a NTHS office, has sampled the air quality throughout the building and plansto test wet areas in other schools.

The stachybotrys mold was discovered Dec. 18 after an environmental firm investigated the high school to determine the cause of two employees’ allergic symptoms. Two employees filed workers compensation claims Oct 2, 1998 for skin, eye, and nasal irritation in the workplace.

A firm, Restoration Consultants, was hired to remove the stachybotrys and penicillin aspergillus molds from a square foot area of a high school wall. The firm also took air sample from the rest of the school; the district has not yet received the results, said John Britto, TTUSD director of facilities.

It was discovered that the NTHS office wall was damaged by a snow loader last winter, which allowed water to seep into the wall and created the damp conditions for the mold to grow, he said. The district has been active in its response to the mold because of problems in another district which temporarily closed an elementary school because of the mold. The Fairfield-Suisun Unified School district near the Bay Area dealt with the impacts of parental outrage as well as the problem of eliminating the mold from that elementary school.

At the Elk Grove Unified School District in Sacramento, either the stachybotrys or the penicillin aspergillus mold was been found in about 10 of 32 schools that have been checked since the mold first appeared in May, according to Jim Elliot, director of communications for the 42-school student school district.

With 4.5 million square feet of school space to check, the Elk Grove Unified School District only checks for the mold in places where there have been records of leaks or reported funny smells. The Elk Grove district will conduct air quality tests or drill into walls if needed.

If mold is found in a classroom, the students are moved immediately and parents are notified. He said there have not been any reports of employees or students experiencing physical symptoms from the mold.

“The mold would have to be eaten to become a problem,” Ellliot said.

The publicized cases of poisoning from the stachybotrys mold are from instances of animals or people eating food contaminated by the mold, according to Hicks. The mold is one of thousands of common environmental molds found everywhere, Hicks said.

Why the mold's discovery has caused concern in the public is hard to pinpoint, Elliot said, although every time a mold is discovered in the Elk Grove Unified School District, there are television news reports of it.

"With the rain and the weather, mold has been discovered that people have become aware of and had never thought of it before." Elliot said.

He is unaware of the mold causing any problems at other school districts in the state.

"We're the only district I know of that is actively looking for it." Elliot said. But the Tahoe Truckee Unified School District will be joining Elk Grove in searching for the mold.

Britto said the district will first talk to school custodians to identify any potential wet areas and then test for the mold.

In the meantime, however, the district still does not definitely know if the mold in the NTHS wall caused the two employees’ allergy-type symptoms.

The district has not released the names of the two affected employees.

"We're committed to find out what the problem is," he said. "Maybe the mold wasn't the issue in the first place."

However, according to Hicks, it can be difficult to nail down what causes an allergic reaction, Britto said. The workers compensation office will determine if the school district needs to investigate the potential causes for the employees’ allergic-type reactions.